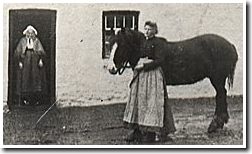 The northern slopes of the Black Mountain around Llanddeusant in Carmarthenshire were farmed by the Evans family for more than 300 years. Their line goes back to Rees Evan (d 1722), “Yeoman of ye parish of Llanddoysant in ye county of Carmarthen” (read his will here) and to Phillip George who died in 1746.  The records attached to the Tithe Maps of 1837-45 suggest that Evan Evans (1795-1862) was renting 18 parcels of land totalling 84 acres from the Gwyn family whose estate stretched from Brecon and north Carmarthenshire to Neath and the Loughor estuary in Glamorgan.  Gorsddu was farmed by the family until the retirement in the 1950s of John Evans (1897-1964) and his sister Myra (1903-1987).

In 1857 Evan’s son Daniel Evans (1829-1911) married Anne Davies (1824-1923), a servant at a neighbouring farm Blaensawdde. It was at Blaensawdde according to the legend of Llyn-y-fan Fach, that a farmer fell in love with the fairy maiden in the lake who gave birth to three sons, the Physicians of Myddfai, before returning to the water after her husband struck her three times.  Ann and Daniel farmed at Draintewon until some time before 1881 when they were living at Nantevan.  By 1991 they had moved to Crincau where Daniel died in 1911 at the age of 81.

A.G Prys-Jones in his 1972 book The Story of Carmarthenshire says that at the beginning of the 19th century, agriculture and the rural crafts associated with it such as the home-based woollen industry provided the main occupations of Carmarthenshire.  He says that the ‘squirearchy’, families ‘proud of their long pedigrees and claiming decent from the stock of Welsh princes, chieftains, nobles and Norman-English lords’ were numerous in West Wales.

“The greater landlords were able to live comfortably and independently without cultivating more of their own land than they found personally convenient or interesting. The major task of agriculture was carried on by tenants and smaller freeholders assisted by labourers.  Both these groups farmed mainly for subsistence, that is to meet their own domestic needs and those of their community”.

Daniel and Anne’s daughter Catherine (1873-1962) married John Herbert Evans (1868-1933) whose family were tenant farmers on land in the Twyi Valley.   The Tithe Maps of 1837-45 suggest that William Evans (b1804) was living at Cwm-Difa and renting 20 parcels of land totalling 88 acres from the former High Sherrif of Carmarthenshire John Lavallin Puxley of Lletherllestry.  Most of it was clover, hay and pasture.

In his 2000 book ‘Capel Dewi and Neighbourhood’, the late Harvey Thomas describes it as ‘one of the most popular and historic buildings in the area’.  He says the local hunt met there in the 1930s.  “At one time the main entrance was at the front of the property with a little shop for sweets and cigarettes”.   He says it was one of the sites attacked during the Rebecca  Riots between 1839 and 1843.

A.G. Prys-Jones says that the parish of Llanarthney had three toll gates and eleven side bars belonging to two trusts.  In 1939 when the Rebecca Riots started, he suggest that typically pedestrians passed without payment, but travellers on horseback paid a penny or twopence.

“For a horse drawing a carriage or the typical Welsh narrow-wheeled farm cart the toll was sixpence but fourpence for broad-wheeled carts which caused less damage.  Cattle and sheep per score cost one shilling and sixpence and a shilling respectively.  At first lime carts were free from tolls.  But as lime became increasingly used by farmers towards the end of the 18th century as the main fertiliser, tolls were imposed,  though at half-price by most of the trusts.  One beleaguered farmer could not move from his land without payment.  His tolls for market and line journeys averaged 50 shillings a year”.

“We do know that there were attacks on the Toll House at Nantgaredig Bridge and also at the public house called ‘Y Polyn” on the road from Nantgardeig to Porthyrhyd where, instead of a gate, a pole was placed across the road.  The obstruction was lowered to allow vehicles to pass over with a discerning ‘thump’ after the toll had, of course, been paid.  Once known as ‘The New Lodge Inn’, The Polyn has over the years changed hands many times and some locals can remember an original ‘toll board’ gracing the wall of this old tavern, which has alas disappeared.”

William’s son Griffith Evans (1830-1914) left the New Lodge to become tenant of the nearby smallholding Waunifor at some time between 1861 and 1868 when on his son’s birth certificate he described himself as a butter merchant.  In the 1871 census he describes himself as a labourer, in 1881 a toll collector, in 1891 a railway platelayer and in 1911 as a retired railway worker.  By then two of his sons are working as coachbuilders and had set their business building wagons in Llanelli.

The Puxley Estate (known by then as Capel Dewi and Coedgain Estates) sold the tenancy of Waunifor and Cwmdifa by auction in Carmarthen in 1918.  Y Polyn was bought back into the family by William’s grandson John Herbert Evans (1868-1933) on his retirement from his welding business when he changed the name back to the New Lodge Inn.   Family papers suggest Waunifor was sold in 1936 and the New Lodge Inn in 1938 for £400 by John Herbert’s brother William Valentine Evans (1881-1967).  Uncle Bill is buried in the churchyard at Llanarthney with his sister and his parents.

1 thought on “The Evans families of Carmarthenshire”