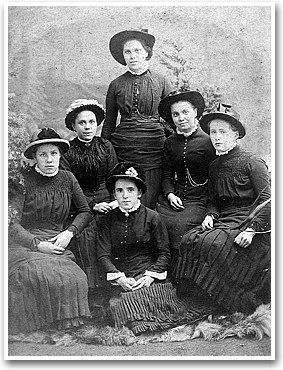 The Llanelly Pottery was the last of the large scale potteries in South Wales.  Sarah Jane Roberts (1859-1935) was the main decorator of the cockerel plates which became its trademark in the early part of the twentieth century. Her father Thomas Roberts (1833-1904) was a glost fireman and three of her sisters Annie (1856-1886), Margaret (1864-1921) and Elizabeth (1868-1940) were also paintresses although their work was not as well known.

Thomas’ father William Roberts (1805-c1845) was one of the many potters from Burslem in Staffordshire who moved to South Wales when William Chambers Junior opened the business in 1839.  According to John Edwards in his 2001 book Llanelli Story of a Town, Chambers:

“.. made sure that there were good homes for his workers by building substantial houses for them in Pottery Street and Pottery Row (later Pottery Place).”

Richard Guest (1803-1860) had been thinking about emigrating to America with his son when he heard about the new pottery, changed his mind and walked 170 miles south. He told his family that when he arrived in Llanelli, people were inhospitable, reluctant to give him lodgings, and unable to understand his English. In shops he had to point to what he wanted. Richard Guest returned to Burslem but his son David (1825-1892) remained, as did the Henshalls, Martha Cartledge (b1814), the Tofts, a Wedgwood and the Tunstalls who ran a cafe in Cowell Street under the slogan “T for Tunstall, Tunstall for Tea”.

Working conditions at some of the English potteries were hard. Thomas Chapman Dewsberry (1817-1892) told how he fainted through hunger at the Herculanium Pottery in Liverpool, often going a whole day without food. In 1841, eleven year old George Guest (1831-1903) gave evidence to Samuel Scriven’s Royal Commission on child labour describing his fourteen hour working day at Enoch Wood’s factory in Burslem.

“I ought to be at work at half past six, when the quarter bell rings; I am allowed half an hour for breakfast, and take it in stove room; I do not take half an hour to eat it, not more than ten minutes; must eat it as sharp as I can; I can please myself though about that; I take it quick ’cause John takes his quick and gets to work pretty sharp; should like a play in the yard, but caana have it; I go home to dinner and then take my hour; leave work at six on Mondays, and at half-past eight other days; when I get home my legs ache; I am too tired to play then, but get my supper and go to bed. Sometimes father tells me to read a chapter: he prays to us every night; I can read pretty well; don’t write, but I shall try soon”

Pottery workers could be exposed to high quantities of lead which was used in glazes and mineral dust making them susceptible to conditions such as lead poisoning and silicosis.  Was that responsible for the wasting illnesses that killed Sarah Jane Roberts and her sisters Emma (1874-1944) and Elizabeth (1868-1940)? According to their great niece June Sinclair: “They seemed to get smaller and thinner until they faded away.”

The Llanelly Pottery was forced to close in 1875 but was re-opened two years later by David Guest (1825-1892), helped by his brother George Guest (1831-1903) and their nephew Richard Dewsberry (1841-1906). The business remained in the family until, under pressure from cheap foreign imports, it closed in 1922 and was subsequently demolished. Nothing remains on the site except a blue plaque on the wall of a nearby shopping centre.