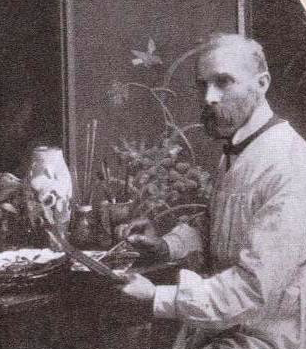 Two talented artists, a couple of thriving businesses and three houses in Staffordshire: Thomas Chapman Dewsberry (1817-1892) was the head of a prosperous Victorian family.

Thomas Chapman’s father Thomas Dewsberry (1783-1826) had gone to sea as a cabin boy and risen to be a sea captain, living in a large house in Liverpool.  He was master of the brig Constitution when he drowned off Demerara on the north coast of South America. The Demerary and Essequibo Royal Gazette of July 8 1826 reported:

“Drowned, last night, between the hours of nine and ten o’clock Captain Dewsberry of the brig Constitution and a boy named Hunter, of the same vessel.  The body of the latter (with the loss of an arm) was picked up this morning but that of the unfortunate captain has not yet been found.  It is said that the board upset crossing a hawser of another vessel at anchor in the river.  We understand the Captain has left a wife and several children to lament his loss”

According to an account written by his grandson  the proceeds of the sale of a plantation were lost with his body and his wife and children were left penniless as a result.    Whilst the UK had passed an act outlawing the international slave trade in 1807 the Guyanese slave census of 1819 counted 23,881 slaves in the neighbouring region of Berbice.  Cargo records suggest that the Constitution, a 231 ton copper sheathed ship owned by Dixon and Company was involved in supplying plantations.  Earlier that year it had sailed from Liverpool to Demerara with a cargo advertised as including:

“well cured Lancashire hams, mess pork and beef in barrels and half barrels, planters choice in barrels and half barrels, soap and candles in boxes and half boxes, double refined sugar and strong Burton ales, new pickled Cork butter in firkins and half firkins, Barclays double brown stout in pint and quart bottles, a general assortment of plantation stores and negro clothing, and of former importations, old Madeira, wine in pipes, hogsheads, quarter casks and bottles”.

After his father’s death Thomas Chapman Dewsberry was sent to live in lodgings.  He worked in the saggar house at the Herculaneum Pottery which made creamware, pottery and bone china at Toxteth in Liverpool between 1796 and 1841.  According to his son George Henry, food was in short supply and he often faced near starvation.

At some time in the 1830s the Herculaneum Pottery took a lease on the Greenbank pottery in Saint Helens in Lancashire and it was probably there that he met Richard Guest (1803-1862). a dipper who was involved in the early days of the temperance movement.  David’s wife Elizabeth Guest (1803 -1832) was only 29 when she died of Cholera leaving him with four young children. She was “an exemplary woman, a faithful and industrious wife”, according to a report of her death in the Cumberland Packet. Richard was described by his son George in his evidence to the Scriven Report on child labour in the pottery industry in 1841 as “a great drunkard” before he signed the pledge.

Thomas Chapman Dewsberry was 18 in 1838 when he married Richard Guest’s sixteen year daughter Sarah (1823-1897) on the same day as a temperance festival was held in the town.   At some point after that the whole family set out on foot for Burslem in Staffordshire where the family’s fortunes were to change once again.

According to his son, Thomas Chapman Dewsberry became the first employee of James MacIntyre, who later ran the Washington Works which employed William Moorcroft.  He fired MacIntyre’s ovens and as the business grew the family thrived on the proceeds.  Thomas and Sarah had twelve children, seven of whom survived. Two of their sons David and George Henry were talented artists and another, Richard, moved to South Wales to run the Llanelly Pottery.

David Dewsberry (1851-1929) was world famous for the orchids he painted for the Doulton factory where he worked between 1889 and 1919. Examples of his work change hands today for tens of thousands of pounds. David Dewsberry conducted the Burslem Congregational Choir for thirty years. His gravestone at Burslem Cemetery bears the words ‘gone to join the choir invisible’.

David’s younger brother, George Henry Dewsberry (1857-1939) was also employed as an artist at Doulton’s.  Trained at the Burslem School of Art from the age of 13, he later started a business with another Doulton Artist F. Bates.  Bates, Dewsberry and Co of Hanley decorating tiles, some of which are in Osborne House,  Queen Victoria’s home on the Isle of Wight.  In later life he became involved in the Christian Science movement.

Richard Dewsberry (1841-1906) moved to South Wales to run the Llanelly Pottery with his uncle David Guest (1825-1892).   He was a deacon of  Park Church, the chapel set up to cater for the growing number of English speaking pottery workers in Llanelli which was gutted in an alleged arson attack in 2015.  He sat on the committee of the Llanelly Mechanics Institute, which became the public library, a member of the Liberal Club Committee and of the executive of the Liberal Association.  Around eighteen months after being diagnosed with with a heart complaint he collapsed and died at the pottery.

Richard’s father-in-law Robert Gilmore (1811-1881) was another fire man who became a pottery manager and accumulated a substantial estate.  Born in Glasgow he moved to Stoke and then to Burlsem.  In his will he leaves twenty houses, four in Lyndhurst Street in Burslem, four in nearby Orme Street in Burslem and 12 in Bradwell Street in Longport as well as a ‘piece of land he has lately purchased in Joseph Street in Burslem’.  When he retired in 1869 at the age of 58 he was presented with a portrait by the ovenmen of the potteries.  He sat on the Board of Arbitration ‘as a member of which he had won the respect of both employers and workmen by his manly straightforwardness and conciliatory bearing’.  ‘A zealous Christian’ he was a member of the New Methodists at Dalehall, the local temperance society and the Burslem Board of Health.  According to a report in the Staffordshire Daily Sentinel, more than 200 people attended his funeral including members of the temperance and overmen’s society.

Thomas Chapman and Sarah Dewsberry’s daughter Margaret Dewsberry (b1848) married another potter William Walker (1844-1903). Their son Thomas Dewsberry (1862-1921) lost an arm in a railway accident in 1874 at Black Bull railway station: he later became stationmaster at Congleton in Cheshire.  Their daughter Sarah Dewsberry (b1856) stayed at home caring for her sister Elizabeth (1846-1916) who had a learning disability.

•William Lowe was shot in the head and his body buried in a shallow grave under a tree near in Tasmania (read about it here). William Cole, the man charged with his murder had been co-habiting with Lowe’s wife Hannah (1819-1886), described as ‘a most depraved character’. Lowe’s clothes and possessions were found near Cole’s home. She was arrested for the killing but denied any involvement and was later released. She testified at Cole’s trial that Cole had been worried that she would return to her husband. Cole was found guilty and sentenced to death in July 1835.

3 thoughts on “The Dewsberry family of Burslem”