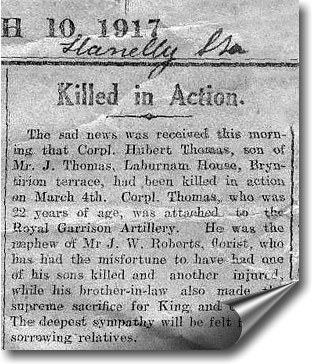 Between 15 and 22 million people are estimated to have died in the First World War.  More than 300,000 are buried in military cemeteries hundreds of miles from home.

Tom Roberts (1892-1915) was 23 and serving in the second battalion Cheshire regiment with the 84th brigade when he was killed in the last days of the Second Battle of Ypres.   A recently qualified teacher, he had served in the Officer Training Corps at Aberystwyth University and gave up a teaching job in London at the outbreak of the First World War to volunteer for active service.   He was stationed at Birkenhead before arriving at the front in March 1915.   He survived for just over three months but describes parts of his experience in letters to his parents which were later deposited in the archives of the Cheshire Military Museum. .

His first action on 22nd April 1915 was at Gravenstafel Ridge, the battle at which Germany deployed chlorine gas for the first time:  ‘a horrible gas’ which ‘asphyxiated 50% of the Canadians’.

On 10th May 1915 he was one of two officers in his battalion to survive the battle of Frezenberg Ridge: ‘there is one other officer left who has not been killed or wounded, but his nerves went and he has had to go to hospital’.

As a result Tom was allowed home on leave for three days.

On his return to the front he was sent into action with a weakened force at Bellewaarde Ridge where on May 24th 1915.  According to his regiment’s official history, all the battalions of the 84th Brigade were very weak, made up to strength with drafts of immature, inexperienced and untrained men after ‘the terrible day at Frezenberg’.  They were tired and hungry, they had ‘no chance to cook food’.

Tom was gassed and fatally wounded in the chest and leg, one of six officers to die in the battle.    According to a letter written to his parents shortly afterwards:

“Lieut. Roberts, suffering from the effects of the poisonous gases employed by the enemy, was removed to a farmhouse in the vicinity of the scene of the conflict, and the medical orders were that he should remain there.  Full of the fighting spirit and anxious to avenge the deaths of many of his men, the gallant officer sprang to his feet immediately.  He rushed out, and, overtaking his company, led them on in another attack on a German position.  ‘Come on, boys’ he shouted, taking the lead, and after advancing a little further he fell with a bullet in his chest, being also shot in the leg.”

He is buried in Bedford House Cemetery (locate his grave here).  His parents visited the grave in one of the many tours organised in the 1920s by travel companies such as Thomas Cook.   His great niece June travelled to Ypres in 2011 when she was in her eighties.

His younger brother, my grandfather, Frank Roberts (1894-1960) was commissioned as a second lieutenant in the 15th (Carmarthenshire) Battalion Welsh Regiment in March 1915.  After training in Rhyl and at Morn Hill Camp in Winchester he was sent to the front in France on 3rd December 1915, a few months after his brother’s death.  The 15th Welsh spent their first night in France at Ostrohove, overlooking the harbour in Boulogne before entraining for Aire in Northern France with the 38th (Welsh) Division.

After nearly six months at the front and in and out of the trenches, on 31st May 1916 he was seriously wounded in a friendly fire incident.   He wrote to his parents:

“It was an unfortunate affair altogether. I had been out patrolling for an hour and a half. We couldn’t see 10 yards in front of us owing to shell smoke and fog. Things had been a bit busy – as a result one of our listening posts got a bit nervy and bombed us as we were coming back without challenging.   Well, the first one hit me before it exploded and gave us warning and so I escaped with my life by turning my back on it. I thought I was done for, I can tell you – but I managed to crawl into the trench and find it was one of ours and then got assistance.  Since it happened I’ve been miles on a stretcher, had about five motor rides and one train journey of about 12 hours. So you see, since I have about nine pieces of bomb distributed over different parts of my anatomy I couldn’t very well write”.

It was just a few weeks later that his regiment sustained heavy casualties in Mametz Wood on the Somme.  Frank recovered and returned to the front in August 1918.  In September 1918 he was wounded again and awarded the Military Cross.  Like many other service personnel of the time he didn’t discuss what happened in any detail.  He declined an invitation to be presented with the MC.  The citation records how:

“With 16 men and no officer, by judicious use of his Lewis guns he deceived the enemy as to his numbers and held on to his position for 24 hours without support on his flank, under heavy shell fire, inflicting considerable casualties on the enemy both with his own guns and with machine guns captured the day before”.

In 2016 he was identified as the sitter for a picture bought at a car boot sale and featured in a music video about the Great War.

The Roberts brothers’ cousin Corporal Hubert Thomas (1896-1917), only child of John and Elizabeth, was 21 and serving with the 183rd Siege Battery, Royal Garrison Artillery when he was killed at D’Amien (locate his grave here).

Their uncle Lance Corporal William Hawkins (1873-1916) was serving with the 8th Battalion Welsh Regiment when died in Mesopotamia leaving a widow and an eleven year old daughter.  His grave is in the Amara War Cemetery in Iraq, which has been vandalised and looted since being abandoned by the Commonwealth War Graves Commission during the First Gulf War (locate it here).

Lance Corporal Hubert Gilmore Dewsberry (1898-1917), only son of Robert and Lizzie, was nineteen and serving with the 1st/4th Battalion Welsh Regiment when he died in Gaza a year later (locate his grave here). His cousin Lance Corporal Reginald Jack Dewsberry (1893-1916) was just 23 and serving with the 11th Battalion Cheshire Regiment when he died at the Sommes (locate his grave here)

Captain David Roberts Morgan(1886-1939) was serving with the Royal Welsh Fusiliers when he died at the beginning of the Second World War.  He’s buried at the Netley Military Cemetery in Hampshire (locate his grave here).

David Dewsberry Evans (1933-1960), only child of Ivor and Muriel, was 26 and serving with the First Field Battery Royal Artillery at Nisab in Aden, when he was shot dead with a machine gun by one of his own men.  The plaque in David’s memory on the wall of St Peter’s Church at Long Bredy in Dorset where his father was the vicar says he ‘died gallantly protecting one of his men’.  It quotes St John’s Gospel: “Greater Love has no man than this, that a man lay down his life for his friends”.  A court martial was told that 21 year old Lance Bombardier Harry Whiteside from Belfast who had a ‘violent antisocial history which could lead to schizophrenia under stress’ had shot David dead after he failed to respond immediately to his request at a barbecue to borrow a record player.  Whiteside was imprisoned for life.  My father, his cousin Gilmour, said:

“Due to the climate, burial could not be delayed and the adjutant sought instructions for the funeral.  A wealthy parishioner of David’s father offered to fly him both ways for the funeral but he declined.  The funeral was held near the place where he had fallen, surrounded by his comrades with full military honours including the Union Flag and his sword and headdress displayed on the coffin.  His father and mother have long gone to their rest so nothing remains of the inquiry save the words Dear Daddy, written in pencil on a scrap of paper – the beginning of a letter he had begun to write on an empty ammunition box and another addressed “Dear All” containing items of local news”.

To borrow an expression from Uncle Tom’s obituary, written by one of his friends: “their soldierly actions will blossom, even in the dust.”