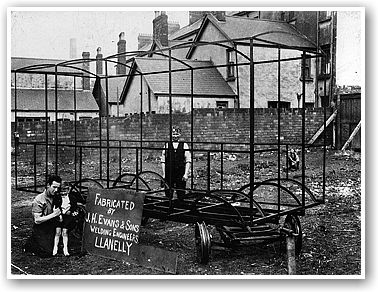 Coal, copper, lead, iron, tinplate, the development of the railway and the docks transformed Llanelli in the nineteenth century from a sleepy village into a bustling industrial town.

At some time between 1891 and 1901 John Herbert Evans (1869-1933) and his brother William Valentine Evans (1881-1967) started the Western Wagon Works at Gathen Yard,  now the site of Gathen Close behind Station Road and Great Western Crescent in Llanelli.  They had moved to Llanelli from rural Carmarthenshire where their father had worked on the railways.   It’s not clear where the brothers learned their trade but there was a family connection to John Rees (1841- 1914) of Broad Oak Saw Mill in Llangathen who was also a wheelwright and coach builder.   He married their sister Letitia (1876-1961) and the brothers named their works Gathen Yard.  According to my father his Uncle Bill had built the wheels for Llanelli’s first mail coach.

John Herbert’s son Griffith Aneurin Evans (1899-1964) joined the family business on his return from the first world war.   As demand for coach building declined, the business developed into a welding and foundry business.  Griff’s son Robert Dewsberry Evans (1940-1994) ran the business until it closed in the 1980s. 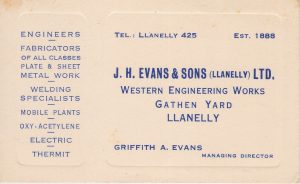 Griff bought his family up in Felinfoel Road and then moved to 12 Great Western Crescent.  After Griff’s death in the sixties, Doris and her sons lived in three adjacent houses on Station Road behind the works: Doris with her sister Muriel in number 130, with my father Gilmour after his divorce, John Alan Evans (1935-1985) lived above his jewellery and watch repair shop in number 128 and Robert lived with his family in number 126.

Evy Thomas (1835-1874), son of a stonecutter, worked as a mason in the tinplate works but died young after inhaling particles of stone. Three of his sons worked in the tinplate industry and his daughter Lizzie (1873-1943) married another mason Robert Dewsberry (1874-1926).