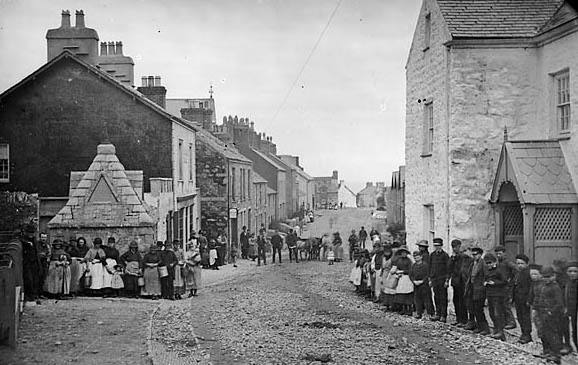 My grandmother Eluned Griffith (1898-1990) came from a family that embraced the Welsh traditions of music, religion, education and the seafaring heritage of the Lleyn Peninsula in North Wales.

Williams Williams (1806-1884) was a drover and farmer who brought his family up at Penaber in Criccieth and from some time after 1851 until the 1880s at Ty Newydd in Llanystumdwy, later the home of David Lloyd George and now the National Writers Centre for Wales. His three sons went to sea: John Williams (1835-1893) who died in Beunos Aires, William Williams (b 1837) and Robert Williams (1844-1930) who served on the New Quay lifeboat in Cardiganshire.  In his 1987 memoire The Red Dragon and the Rising Sun: Prelude, Robert’s grandson Noel Davies (1919-1992) says Robert recalls his father fitting shoes on cattle before driving them to English cattle markets.

“His brother was the village blacksmith who, before the development of railways, was kept busy shoeing cattle for the drovers.  During my grandfather’s time the drovers had almost completely disappeared from the Welsh scene and his uncle depended on shoeing horses for a living.  The village boys habitually gathered near the busy smithy.  One boy who came to see the horses being shod was David Lloyd George, who was destined to become famous as a statesman”.

Many of their children and grandchildren continued the family’s maritime tradition as merchant seaman and in the Royal Navy during the war.

William’s daughter Catherine Williams (1838-1907) married Rev John Jones (1831-1909), son of the blacksmith at Llanynghendl on Anglesey and the minister at Pencaenewydd for forty years (view pages from his family bible here).

His brother and two of his grandsons also became seamen: Captain Emrys Griffith (1903-1988) and Captain Ioan Griffith (1896-1959) who lost an ear after contracting frost bite during the Second World War.

When Kate Jones (1879-1911) died at 32 “after a short illness” leaving two young children, the widower, Captain Owen Jones (1871-1915) “was unable to be be present, being far away in China”.  He died four years later in Marselles leaving two daughters Anne Wynne (b1909) and Catherine Theresa (1911-1952) who were brought up by his sister Letitia. His chest and trinket-box are in the Lleyn Maritime Museum at Nefyn.

John and Catherine’s daughter Letitia Jones (1872-1942) married Hugh Griffith (1862-1922) whose father and grandfather were shoemakers at Well Street in Nefyn. Hugh studied at Bangor and became headmaster of the school at Llithfaen, where he led his own choir and “once brought an orchestra to the slopes of the Eifl, so that his pupils and neighbours could enjoy and appreciate the musical masters.”  He was said to have inherited his musical talent from his mother Ellen (1831-1891) “of the same religious disposition and well-versed in the spiritual melodies and rhymes of her nation”.

To support the family, Letitia and Hugh lived apart. He ran the school at Llithfaen and she ran the grocery shop and post office in Pencaenewydd.  The children would deliver messages from the post office to the “big house” on the Glasfryn Estate, home of Clough Williams-Ellis, the architect of Portmeirion. My grandmother Eluned said that she was given Swiss chocolate there which was “the best she had ever tasted”. It was there around the turn of the century that Clough’s mother Ellen Williams-Ellis painted the watercolour of a young Eluned and her elder sister Nevina shortly before Nevina’s death at the age of eight from diphtheria.

Taliesyn Griffith (1901-1959) returned to Pwllheli and founded the male voice choir Glannau Erch which gave more than eighty radio broadcasts on the BBC and “rekindled interest in songs which were popular in their grandparents’ days”.   A judge at Eisteddfodau,  a collection of traditional songs he transcribed is held at the Museum of Welsh Life at St Fagans.

The Welsh language at the time was thought to be an impediment to getting a good education. In parts of Wales, children were punished with the Welsh Not, a token passed to any child heard speaking Welsh at school.  My grandmother told me that her father had a different attitude: she was given a penny if she spoke English throughout the day.

A family bible which remains intact in Pwllheli includes a biography in Welsh of Rev John Jones (1831-1909).