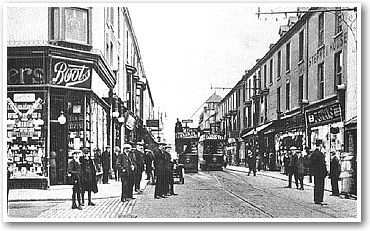 James Blackmore (1835-1902) and Ann Blackmore (1833-1893) moved from Somerset to Penllwyn Uchaf on the Pembrey Mountain shortly after the birth of their first child in 1857.   Like his father, James worked as an agricultural labourer but like thousands of others, at some point in the 1860s he left the land for physically hard and dangerous work as a lead smelter and later a silver smelter.

In 1831 the population of Llanelli was just over 17,000.  This number almost doubled over the next 20 years and the next thirty years would see it double again.  ‘A short history of Llanelly’ written in 1897 describes how the town grew during the industrial revolution from a small village ‘inhabited principally by fishermen and colliers’ into a thriving town producing copper, steel, lead, iron, silver, chemicals, bricks, patent fuel, ships, iron, timber, anchors, ropewalks and pottery.   Its success was built on rich seams of coal underneath the town and the natural port from where the ‘vast resources of the Gwendraeth Valley can be shipped for export’.  John Edwards in his 2001 book Llanelli Story of a Town describes the attraction of migration from rural areas to physically hard work in dangerous conditions:

“They came from the countryside around and were well used to hard work though it yielded little profit.  Although they exchanged the suffocating atmosphere of heavy industry, there were certain advantages.  Their wages improved and, as they saved money, they bought well-build stone house houses with running water and upstairs bedrooms.  They found shops, within walking distance, offering an every-increasing variety of food and a large market in the middle of the town.  They brought their countryside values with them and were always ready to help and support each other in and out of work.  They freed themselves from the tyranny of the land and became used to the idea of self-reliance.”

On December 20th 1866 the Llanelly Guardian reported the opening of the new market place in town:

“In our rambles through the town gazing into the shops garnished with an abundant supply of Christmas luxuries we were struck with the attractiveness coupled with the taste and ingenuity which they were invariably presented, illuminated with brilliant lights.  The drapers’ windows were all well-dressed and ornamented with artistic taste.  Confectioners tempting displays of sweets and sugared cakes were not less imposing.  The most remarkable amongst the grocers seemed to the tea exchange and market emporium with pillar currents, figs and fruits of every description interlined with the beautiful green flora of the season.  Mr Ace’s toy shop in the market hall presented two superior Christmas trees as if they were the creations of some eastern gem”.

Young ladies and gentlemen would parade along Stepney Street on Sunday afternoons and it was there that John Wells Roberts (1862-1932) met his wife Caroline Martha Blackmore (1871-1960).   It started to rain and he offered the protection of his umbrella.  The couple shared an interest in politics.  He was one of the first members of Keir Hardie’s Labour party in Llanelli. She would insist on all women in the family voting, as she felt it was a privilege.

James and Ann remained in Llanelli for forty years until Ann’s death in 1893 when James returned to Somerset but three sons and five daughters remained.  According to my mother they were known as “the Blackmore beauties”.  “The Blackmores were all good looking” she said.

2 thoughts on “The Blackmore family of Somerset and Llanelli”